A hysterectomy is a surgical intervention performed to remove the uterus of a woman. The uterus is also called as the womb where a baby develops when a woman becomes pregnant. A hysterectomy is performed for many reasons. The surgery helps to treat a number of chronic conditions, certain types of cancer and infections.

The extent of a hysterectomy procedure depends on the reason for the surgery.
A hysterectomy might be involved in removing the entire uterus and cervix or partial removal of the uterus and its parts. The doctor may also remove ovaries and fallopian tubes along with the uterus called oophorectomy. As we know the ovaries are the organs which generate estrogen and other hormones and fallopian tubes transport the egg from your ovary to the uterus. So, after surgery, you’ll stop having menstrual periods and there is no chance to bear children.

There are also some surgical risks and long-term effects, so hysterectomy is recommended only after conventional treatment options are not available or have failed. 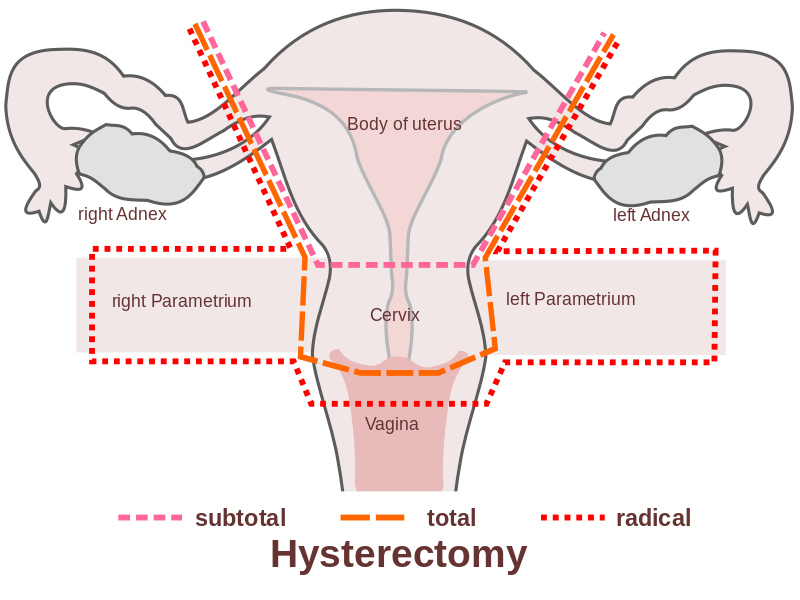 Hysterectomy is the second most common gynaecological surgical procedure, performed in women after a cesarean section. Hysterectomy is commonly carried out in three different ways.

Abdominal hysterectomy: This procedure is called open surgery which involves removal of the uterus through a large cut in the abdominal cavity.

Laparoscopic hysterectomy: It is also termed as keyhole surgery which involves removing the uterus by making several small incisions in your abdomen.

When Hysterectomy Is Recommended?

A doctor may recommend a hysterectomy in the following conditions when other treatment option failed to improve the condition:

In the case of uterine cancer, a hysterectomy is the best treatment option and the procedure is called radical hysterectomy generally done only when cancer is present.

What Is Laparoscopic Hysterectomy?

A laparoscopic hysterectomy also called keyhole surgery, a minimally invasive surgical procedure which helps to remove the diseased uterus. In this procedure, some small incisions are made in the abdomen and a small tube called laparoscope with a tiny camera head is inserted. The surgeon watches the parts inside with the help of this camera on a monitor and performs the operative procedure. Two to three tiny incisions are made in the lower abdomen and some specialized instruments are inserted to remove the uterus, cervix and the surrounding tissues.
In the case of laparoscopy-assisted vaginal hysterectomy(LAVH), a laparoscope is used in the general vaginal hysterectomy procedure.

What Are The Advantages Of Laparoscopic Hysterectomy?

The procedure is safe and secure because of the post-operative complications are less and very rare.

Who Can Have Laparoscopic Hysterectomy?

Generally, most of the patients having problems like uterine bleeding, fibroids can choose a laparoscopic hysterectomy surgery for better results. However, in some cases, it may not be possible when the uterus is bigger or have had multiple prior surgeries in the lower abdomen. Usually, it is usually not suggested for women with gynecologic cancer.

However, there are some possible complications associated with hysterectomy surgery. Before you decide to go for surgery, it is suggested consult experts or experienced doctors and take their opinion. If you want to know more information consult our expert doctors at Angel’s Fertility Center and take their opinion for a better life after surgery.